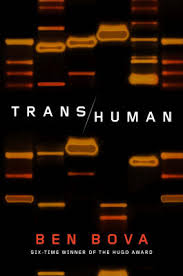 “Bova is a master storyteller.” (The back cover of TransHuman assures us.) “Bova gets better and better, combining plausible science with increasingly complex fiction…. The sort of gritty, hands-on, you-are-there yarn at which Bova has long excelled.” Yet, as aging biologist Luke Abramson co-opts an attractive young nurse into helping him abduct his terminally ill granddaughter for experimental treatment, and for good measure then self-medicates from the clinically untested fountain of youth, the only place readers will find themselves is sitting glassy-eyed through a drawn-out soap (not space) opera, throwing good money after bad.

Ben Bova may well have won six Hugo Awards, but these were for his editing of Analog in the mid-1970s, not for writing; and even then, one might suspect that his skill must have been more in selecting stories than in moulding them. TransHuman is told through bland, matter-of-fact prose, the most notable feature of which is repetition. Character traits and motivations are established and then shamelessly reiterated with a view to inculcation. (Abramson’s catchphrase, ‘If you don’t help me then you’ll be killing my granddaughter’ wears thinner than any rat-trodden treadmill of science.) The plot, for all its pretensions to thrill, is more like the inner monologue of a sprightly yet unambitious Galapagos tortoise over-explicating for its more dim-witted brethren. The moral, ethical and social issues – not to mention the cringe-worthy interpersonal dramas – are raised ad nauseam and in much the same voice by different characters. All in all, it’s enough to occasion several incredulous flips to the back cover, followed by pained winces as to the disparity between what is written there and what lies within the book itself.

Bova is a prolific author, renowned for his scientific knowledge; yet, if ever there were a case for citing Hans Christian Andersen’s The Emperor’s New Clothes, this would appear to be it. In so far as TransHuman gives evidence, Bova is guilty of presenting us with a totally nude first draft, touted with great vim but in no way edited by the good people at Tor books. The result is a thoroughly undignified outing wherein the author, far from making amendments to the stilted telling of his story, gives every appearance of having not read over it, even once. In the instance of Abramson’s so-called first encounter with Fisk (page 295), which comes several flaccid plotbeats after they originally met face-to-face (page 117), even the most toadying of Bova apologists will find it hard to proffer any explanation beyond his simply having forgotten what he wrote earlier; in short, that Ben Bova, irredeemably and in black and white, lost the plot.

There may be genuine scientific relevance in the concept of telomere inhibitors being used both to fight cancer and to prolong human life. In fact, TransHuman, if more deftly crafted, might well have made for a passable novelette or novella. Bova, however, has taken up the latitude afforded by a novel-length work, and used it to hang his underdeveloped characters, even going so far as to drop, most jarringly and with lurching flights of whimsy, from third- to first-person in chewing through and spitting out the homogenous thoughts of Abramson and his abject co-stereotypes. “Bova’s latest novel,” suggests a review solicited for the back cover with recourse only to Bova’s reputation and the nominal genre of science fiction, “is one of his best, and a classic use of the old SF theme of humanity reaching out for immortality among the stars.” It seems unlikely that Ben Bova fans will agree, or indeed that first-time Bovarians will approve any further reading to test the assertion.

Do you Agree?
Order HERE

A terminally ill cellular biologist uses a medication that unexpectedly causes him to age backwards while he flees the FBI with his young granddaughter to obtain a not-yet-approved treatment for her inoperable brain tumor.