Holiday Dinner with a Plethora of Badass 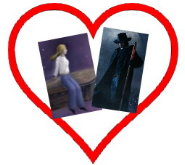 The holidays come ever closer, and we plan for friend and family visits (maybe even presents, and romantic trysts under the mistletoe.) I always wonder who I might know that needs a place at our table. It has long been a tradition in our family to seek out singles, and those without loved ones, and to bring them home for the holidays.

When I was in college, I drug home foreign exchange students who would have been staying in their cars. This year my daughter is bringing home the French.
But, what about some of our favorite book people— the loneliest souls I know of are fictional characters. I want to invite Jim Butcher’s Harry Dresden.

The dear, solitary man is amazing. Not only has he saved the world numerous times, but he hasn’t had a lovely Christmas since his dad died. He doesn’t celebrate at all—which is sad. Since his relationships always seem to go south in the worst possible way, I’m going to put his name card next to Charlaine Harris’s Sookie Stackhouse (the book-style Sookie, of course. The television Sookie is a little too Sex in the City for me.)

Seriously guys, Sookie likes tall men, and Harry is tall. Harry loves blond women, and Sookie is blond. They both love to read, and Sookie isn’t addicted to the internet so Harry wouldn’t blow up her computer every time he stubbed a toe. Plus, Harry can go on dates when the sun is out. When you add these likability factors to the fact that Harry could totally gank any vampire or werewolf that tried to snack on Sookie—there would be true love. All I need to do is to strategically maneuver them under the mistletoe. This could totally work out.

The next character I’m adding to my guest list is Leigh Evan’s Hedi Peacock.  I can’t tell you a lot about Hedi’s story because The Trouble With Fate  will release on December 26th. (You’ll have gift cards and I’m telling you now that you want this book.) I can reveal that Hedi is half-fae, half-were, and so funny and droll that you’ll love her immediately. Of course, like our other favorites, for Hedi, true love is a bumpy road, and I want her to take a break from everyone-in-creation trying to kill her, and have a nice holiday.

So I’m sitting her next to Dean Winchester from the television show Supernatural. He is hot, and he’s never once ganked a fairy. (He’s totally killed werewolves but since Hedi doesn’t go furry, it could work.) They both have itchy feet and like to move around. Hedi’s never had a new car so Dean’s Impala won’t be a problem. She’ll adore it. Also, Dean is excellent with guns and knives. They’ve neither one had a lovely holiday so they’re on my guest list. They’re perfect for each other!

My favorite character from Buffy the Vampire Slayer has always been Spike, played by the amazing James Marsters. The man is hawt with legs, and has a voice that makes panties spontaneously combust. (If you don’t believe me about the underwear, check out one of his audio books here for free.) In my humble opinion, Spike never received his due rewards—not romance-wise. Buffy totally dumped on him, and all he got was the opportunity to explode himself to save the world. In what universe is that adequate compensation? This is way not fair.

I’m setting Spike’s place card next to the awesome Megan Ory who plays Little Red Riding Hood on ABC’s Once Upon a Time. Red is as tough as Spike, and they both have killed and/or eaten significant others. At meals, Spike could have the blood and Red, the meat. They have soooooo much in common! This romance will be hot enough to melt snow. (No pun intended #OUaT fans.)

For my last romantic guests, I’d like to fix up Laurel K. Hamilton’s Vampire Executioner, Anita Blake with someone special. I know that Anita, and her crew, make the cast of True Blood look like Saint Sookie and the Apostles. But, I’ve always loved Anita—even when she jumped off the boat of kick-ass and into the river of skank—I still admire her courage and tenacity. But the poor girl never had any fun. She needs a date more lively than a dead guy—someone funny, and smart and handsome.

Of course, I may be a tiny bit biased. (Okay, maybe a lot.) I think writers are the most fun, open, and adaptable people on the face of the earth. If anyone could help our Anita have a happy holiday it would be Rick Castle, my favorite imaginary author. Anita could handle the bad guys and he could make her laugh. He’s got a thing for strong women. It could work!

Now that I’ve fixed the romantic holiday lives of my favorite characters ever, I would like to take a moment to wish you and yours a safe, wonderful, and blissful holiday season. I hope your dreams come true.

SHOP The Trouble with Fate:
A Mystwalker Novel

Article Name
Holiday Dinner with a Plethora of Badass
Description
Seriously guys, Sookie likes tall men, and Harry is tall. Harry loves blond women, and Sookie is blond. They both love to read, and Sookie isn’t addicted to the internet so Harry wouldn’t blow up her computer every time he stubbed a toe.
Author
by Julie Butcher-Fedynic
BuzzyMag.com