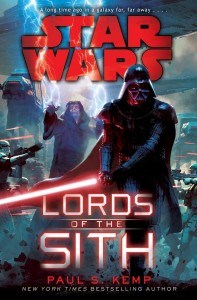 My anticipation for Lords of the Sith

by Paul S. Kemp is best described by calling upon Sith Girl. You remember Sith Girl, right? An excellent pint-sized viral Internet sensation, at least until trolls presumably chased her off the Internet. Anyway! She’s the girl who went to Disneyland, got to do the Jedi Academy stage show, and totally flipped the script. When told to activate her lightsaber against the “evil” Darth Vader, she instead decides to join him and goes down on one knee before the Dark Lord.

I, too, am Sith Girl. Lords of the Sith promised me a rollicking, bloody adventure best thought of as the PALPATINE AND VADER MURDERBUDDIES ROADSHOW. (In my mind. It’s a twisted place.) This is the sort of gleeful, anticipatory state in which I sat down to read the novel.

And, well, I wasn’t given what I expected. It wasn’t the MURDERBUDDIES ROADSHOW of my dreams. In fact, it’s honestly a testament to how well the book worked that I’m not horribly disappointed.

While the novel opens with a brief stint in Vader’s head, all crippled pain and cybernetics and the Dark Side of the Force, the narrative perspective soon shifts to the actual focus of the story: Twi’lek Cham Syndulla and his freedom fighters, smuggling weapons and plotting for the realization of a free Ryloth. (Savvy fans will remember Cham from The Clone Wars animated series, and connect him to his daughter Hera, a main character in the currently airing Rebels. His story is mad relevant.) Thanks to a choice piece of intel, Cham’s plotting soon turns to the lofty and imminent goal of assassinating the Emperor Palpatine and his murderous lapdog, Lord Vader. (Yes, the Emperor decides to visit Ryloth. As everything with him, it’s a ploy to reveal traitors and crush nascent rebellion.)

We do get a healthy dose of being in Vader’s head, but that’s actually the weakest part of the novel. There is such anger, yes, and fragments of Anakin flicker among Vader’s stoic focus on utter obedience to his Master. But the voice of those feelings and thoughts doesn’t ring true – the author just can’t believably capture Darth Vader’s voice. Kemp does, however, excel at showing off the badass qualities of the Sith, and Vader performs enough ridiculous stunts to keep even me delighted. There are plenty of feats of ace fighter piloting, lightsaber-wielding, and shocking Force-use moments to be found in Lords of the Sith.

The novel also furthers Disney’s evident plan to seamlessly weave together all these diverse media installments of the *Star Wars* galaxy. It continues the theme already introduced in A New Dawn

, showcasing the fits and starts that define the birth of the Rebellion seen in A New Hope

. It gives us insight into Hera Syndulla by reminding us of her father and tumultuous upbringing, showing us the blueprint to her seditious spirit, as well as her integrity and commitment to her people.

One of the biggest compliments I can give these books is that they read like a riveting episode of The Clone Wars. That’s absolutely true here, once we get Vader and Palpatine on the ground. And pursued by killer bugs. I appreciate that Star Wars

is and always has been committed to showing the general hostility of fauna across the universe. Think you’re hiding in a cave on an asteroid? WRONG, YOU’RE IN A BEASTLY BELLY. Think you’ll have a pleasant underwater jaunt? WRONG, THERE WILL BE GIANT TOOTHY FISH. Think you’re gonna hang out in a wood until you can call for help? WRONG, YOU WILL BE HUNTED BY A THOUSAND GIANT KILLER INSECTS.

So, you know, be prepared for that.

Lords of the Sith may not have given me a nonstop MURDERBUDDIES ROADSHOW, but it did give me several incredibly badass Sith moments. It gives greater insight into Palpatine’s MO and his daily life as Emperor. And, despite the foregone conclusion that the freedom fighters fail, it actually makes you care enough about them all to feel sad when they do. It also makes you incredibly nervous about whether, when, and how these freedom fighters might get themselves killed. I suggest you honor their foolish sacrifices and the idea of a free Ryloth by picking up this book today.