JMW: Hello: this is Jean Marie Ward at DragonCon for BuzzyMag.com. With me today is A. J. Hartley, best-selling author and professor of Shakespeare. Hello A. J. and welcome.

JMW: Our pleasure. Most people specialize in one type of fiction or another. You write thrillers, The Deborah Miller Series, and fantasy. Y.A. and middle grade, Darwin Arkwright? Did I get that right?

JMW: Why not just stick with one?

A. J. Hartley: Yeah, I think my agent wishes that I would do just the one, make it a lot easier to sell what I do, I suppose. I think the short answer is that I read lots of different stuff, so I want to write lots of different things. I’ve never been somebody who only works within one genre as a reader or as a writer. I’m fortunate enough, because I have another job, I don’t have to worry overly much about the sales of any particular book in order to pay my mortgage for example. If I get an idea about something that I really want to do, then I can go ahead and do it without feeling like I’m going to lose my entire readership. I like the fact also that working in multiple genres means that they inform each other, that I learned from working in one area things that I can then bring into another area. We, after all, live in the age of mash-up and so on, right? I think that’s a good scale to have. It means that I can keep pushing the boundaries of each genre while working with and it, because I’m learning from others.

JMW: I really enjoy the concept of Deborah Miller, the archaeologist, because you bring in so much of the history and it’s a little like the Amelia Peabody series, only modern day and dealing with Greek antiquities.

JMW: Yes, those are the ones.

A. J. Hartley:Yes, there’s an element of the Indiana Jones kind of adventure to it, though I’d like to take the archaeological stuff and historical stuff very seriously, and I like to try and find points of resonance to the present. Points of comparison to what ever the issues are that are being exploited in the ancient past and make them somehow speak to something that’s going on in the present.

A. J. Hartley: Actually, a lot. My middle grade series, the [easyazon_link asin=”1595144811″ locale=”US” new_window=”default” nofollow=”default” tag=”buzmag-20″ add_to_cart=”default” cloaking=”default” localization=”default” popups=”default”]Darwen Arkwright [/easyazon_link] series that you mentioned before, actually working quite similar ways to the archaeological thrillers, because it’s portal fiction, right? It’s the idea that there are soft points between our world and these other dimensions. In certain ways, people in the pastor been aware of these portals and that they are part of the explanation for certain mythological traditions, so they get associated with sacred places, with special places. In the third of the Darwin Arkwright books, for example, there are connections to a certain Neolithic stone circle in Wales and there are points all over.

The second one uses archaeological remains in Costa Rica, which are the stone spheres that actual history and purpose of which people have argued about for a long time. I incorporate them into that ‘what if’ of maybe these are somehow connected. These are human manifestations of an awareness of some alternate universe or something like that.

JMW: Cool, you are a distinguished professor of Shakespeare, so it’s not surprising that you would write about him in your day job, right?

JMW: But how did you wind up rewriting him? What inspired you to novelize Mac Beth and Hamlet?

A. J. Hartley: Well, in all honesty, I don’t know that it’s something that I would’ve done by myself. Because as an academic, as you say, I spend a lot of time writing critically and I’m a performance critic primarily, so I write a lot about theatrical productions of the plays.

JMW: That’s what a Dramaturg is.

A. J. Hartley: The Dramaturg is usually an academic attempt to a production, so it’s the person who is responsible for script editing and working with the actors and making sure they understand, not just what lines mean, but what the range of options are and interpretation of the performance, and what directors might want to know about that period or about performance history of the play, things like that.

JMW: The academic criticism applied to the play in production.

A. J. Hartley: Yes, exactly, so you’re in the rehearsal room and you’re a collaborator in the product, which is the production itself. I do that, but I have never really thought about actually rewriting Shakespeare as a novel. A few years ago, The International Thriller Writers Organization . . . They were doing a collection called the Hundred Must Read Thrillers Essays written by contemporary thriller writers about thrillers that had influenced them. They specifically asked me if I would do something on a Shakespeare play. They wanted me to do something on Titus Andronicus and I said, “Well, as the thriller, I would rather do Macbeth” So I did. I wrote a little essay on Macbeth and the book came out and there were 100 authors sitting in a room for the official release when we were doing the signings.

By accident of alphabet, I was sitting next to David Houston [SP] who’s a British mystery writer who might net before, but didn’t really know. We were sitting at a table together and at some point he said, “You are writing about Macbeth, has anybody done a novel of it?” And I immediately said, “Well, they must have.” Then we thought about it and said, “Well, actually not really, no, but people have done radical adaptations of it or story somehow connected to or really contemporary rethinkings of it.” But, no, and while we were having a conversation, we also got talking to somebody from audible who was looking for original content for audio release and we pitched the idea of an adaptation of Macbeth as a novel. They were immediately interested and we wrote it very quickly. We wrote it by email, because he was in the UK and we worked on it, I don’t know, I don’t remember how many months it was, but it was a fairly fast process. Then it was performed.

JMW: You knew the plot.

A. J. Hartley: Well, there is something of that. You are already in a familiar sandbox almost and then the question is we have to justify the point of doing this, so we can’t simply retell the story. We have to tweak, we have to rethink, and I think my theatrical background actually helped, because we started to think about the process in the way that a theatre company might think about it. When they say, “How do we make this new? What is our angle on this play? How are we going to make it feel fresh and exciting?”

In a way, that’s what we were doing and we brought in a lot of history that is not in play and a lot of other elements, made very specific character choices, but some of which are in accord with the play and some aren’t. Our purpose was, as I say, as with the theater production, we’re not simply reshaping an old play. We are creating a new art object and that’s the purpose. It was performed by Alan Cumming and was very well received, so we were then asked to do another and we did a Hamlet, which has just come out, performed by Richard Armitage of The Hobbit.

A. J. Hartley: Yeah, among other things and a show called North and South, which is very good. He’s currently in The Crucible in London, which has received very, very good reviews. He’s a terrific actor and he’s a very popular actor, has a very powerful fan base, because he’s among other things, cute.

A. J. Hartley: Absolutely, but I don’t think I had fully understood his range as an actor until I heard what he was doing that one, because a voice actor has to do everything, not just narration, but all the different characters and such. He is terrific, wonderful.

JMW: That’s cool, that’s really cool. Hamlet and Macbeth are two of the cornerstones of English literature and here you going rewriting them. Weren’t you a little bit nervous?

A. J. Hartley: Not really, I mean yes and no, I think, to be honest, that where madness lies. The moment you start thinking in those terms, you are dead in the water. We had to go into it and saying, “We are taking the heart of the story, we’re taking the plot, we’re taking some of the key ideas and issues, and we’re going to write our own thing.” We can’t constantly be looking back to see the original. We did very deliberately, didn’t say, “Okay, now we will write Act IV, Scene 1, and let’s look at that and see what has to happen.” It’s like we were doing that at all. We kept a distance from the play. The people who know the plays well are going to hear echoes of particular lines here and there, but on purpose it was an effort to simply translate whatever that means, the play into another idiom. It was to make something new, which grew out of the play. In a way, it’s what Shakespeare, himself, was doing.

JMW: Yeah, well, he didn’t have to start with the new plot.

JMW: Yeah, well, that’s where Hamlet came from. Anyway, that is out. What are you working on now?

A. J. Hartley: I am working on a new, young adult book, which has not been shown yet. I don’t know what’s going to happen to it. It’s not under contract. It’s a brand-new thing for me. It’s set in a place that looks a little like Victorian Africa and the protagonist is a 17-year-old female Steeple Jay [SP].

JMW: That could be fun. I look forward to it. Anything you’d like to add?

A. J. Hartley: I think were good. Thank you.

JMW: We are good. Thank you. And thank you for BuzzyMag.com. 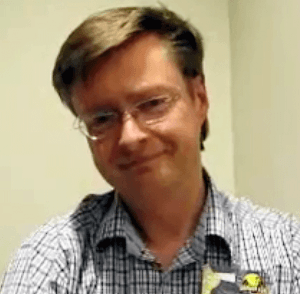