An Interview with Brandon Sanderson

JMW: Hello. This is Jean Marie Ward for BuzzyMag.com. With me today is the best-selling author of “The Mistborn Saga,” “The Stormlight Archive,” “The Rithmatist,” and, of course, “The Wheel of Time,” Brandon Sanderson. Welcome, Brandon.

Brandon Sanderson: Well, I hadn’t ever spent that long away. The Wheel of Time was my dominating project for about five years. I grew up reading The Wheel of Time as though, it belonged to someone else, it feels as much a familiar place to me as any world could. You start reading something when you’re 15, it’s going to feel very familiar to you.

More I’d say, how do I feel with The Wheel of Time being done? At which thing that’s been dominated my life for five plus years my career, it’s a really odd feeling. Never before have I had a series get done that I wasn’t planning to someday go tweak a little bit more, add another short story in the world or something like that.

With The Wheel of Time, I don’t have that opportunity. It’s not appropriate to do it. Robert Jordan wanted it to be done. We’re going to leave it done. There is a strange sense of loss in finishing this series that I’ve never felt before.

JMW: Are you going through the five stages of grief?

Brandon Sanderson: I don’t know. I had such a long time to prepare for it. It’s not like getting hit with the five stages of grief in the same way, since I knew this was only going to be a short thing. But there is a sense of regret. At the same time, being able to write “The Stormlight Archive” is awesome.

I had been planning this series for many years and being able to share with people these stories that I’ve wanted to tell for such a long time is very gratifying. “The Words of Radiance”, the second book, this has scenes in it that I initially sketched out to write some eight, nine years ago that I’d been planning.

They came out just as I’d been planning them and it was really exciting that people can now read those.

JMW: Do the things you sketch out in advance generally come out as you plan them? You’ve mentioned that you are a person who outlines and plots and prepares very extensively. Do the things you see in that first flash of inspiration come out, or is it a rare and beautiful thing when it happens?

Brandon Sanderson: No, I would say it comes out usually in a somewhat unexpected way. There’s usually something about it that wasn’t originally planned. This is the nature of writing. You have to be open and free to do what you’re not expecting to do. Otherwise you’re writing’s going to be wooden and lifeless. You have to be willing to explore ideas as they come to you in the writing process.

That said, I am an outliner. My initial sketches, my outlines, calling them outlines is really a glorified version of a bunch of notes about how a scene is going to feel and what goals I want to achieve in it, but it is an outline. Often, it’s very similar but with some distinctive and major differences.

JMW: Therein lies the joy, I think. We all like to discover a bit, even those of us who are outliners. I want to go a little bit sideways here and talk about your YA fiction.

JMW: First of all, what prompted you to go in that direction?

Brandon Sanderson: Well I read science fiction fantasy. Science fiction fantasy has a very long tradition with juveniles being part of it. We don’t spend as much time distinguishing as some other genres do. I think it’s a great thing that we now have the full-blown YA genre in bookstores.

When I was growing up, it didn’t exist. In my local library, there was no YA section. I would look in the children’s section or in the adult section and I actually found Anne McCaffrey [inaudible 00:04:57]. I asked the librarian about that. She’s like, “Both groups like her.” For me, it’s what do they like? I put it where they like it.

If you go back to the “Heinlein” juveniles, if you look at “Shannara” by Terry Brooks, is this a juvenile, is it not, does it even really matter? I’ve always wanted to write for all age groups. Trying my hand at teenage protagonists in a story only about them was very natural to me. “Mistborn” is about a 16-year-old girl.

Why is it not YA? Because it’s about a 16-year-old girl and other characters who are not and it runs the spectrum. “The Rithmatist” and “Steelheart”, which my two primary YA series, are about focus on a character who is a teen dealing with their life, their problems. That becomes a teen book in today’s parlance.

I think that as science fiction fans see writers, we transcend this, readership transcends this. It’s just a convenient way for us to get a little bit more understanding of the story, what type of story to expect.

JMW: I was especially intrigued by Alcatraz’s super power. I have to ask, was the super power of being able to break anything based on your own kids?

Brandon Sanderson: I didn’t have kids when I wrote “Alcatraz versus The Evil Librarians.” It’s more based on my mother who was really not that great with electronics and seems to be able to mess things up in a really bizarre and interesting way a lot of the time. Though, being late to things, which is Grandpa Smedry’s super power, he’s magically late to appointments.

That’s based on me. I’m pretty good at being late.

JMW: Well, it’s good to put yourself in your own writing in ways people don’t quite expect. That, I’m sure, is not what they were thinking of you. We’ve touched on some of your series, and they’re big books. You’re writing novellas on top of that. You finished “The Wheel of Time”. You’re doing all of these things. Where do you find the time to teach?

Brandon Sanderson: I am, how to write science fiction fantasy, the lectures of which are posted online.

JMW: Oh, wonderful. What is the one thing that you hope your students will take away from your classes?

Brandon Sanderson: I hope that they will learn that being a writer is about training yourself to write great books. It is not about having written a great book. Too many people look at this not as the process of becoming a writer, but as an event of writing a single book. That’s not how it works in the arts.

You want to be a person who can write great books. You want to train yourself to do that. The way to do that is by writing bad books at first. You practice, you write, you experiment, you learn your style. At the end of doing that for years, you figure out what you’re doing, to an extent.

I don’t think any of us actually believe we know completely what we’re going. The writers really just need to practice. If they will practice and sit down and write, they will learn way more than I can teach them.

JMW: Do you find yourself still evolving, still learning?

Brandon Sanderson: Oh, yes, of course. I don’t think there is a writer who doesn’t think that. That’s what we do.

JMW: “The Stormlight Archive” is, I believe, your big project at the moment. . .

Brandon Sanderson: It is.

JMW: . . . the dominating project. Could you give our viewers a hint of what to expect in “Words of Radiance”, and also the next books in the series, not spoilery, just a hint, and then tell them some of the other projects you may be working on?

Brandon Sanderson: I would say that what to expect, hopefully lots of awesomeness. It’s so hard to explain what to expect. Solid world-building. . .

Brandon Sanderson: . . . great characters, magic systems. It is the story of Teton people and their backstories, how they become who they are and whether they fail or succeed. I don’t know what to tell you to expect other than I hope more of the same.

What am I working on right now? I am just most recently finished “Firefight”, the sequel to “Steelheart”, which was my teen release from last year. I’m currently working on the sequel to “Rithmatist”, which hopefully both will come out next year some time.

JMW: Very cool. Is there anything you’d like to add?

Brandon Sanderson: No, sorry. Unless you want to mention people could find a free book of mine on my website, “Warbreaker”, for download. You can just give it a read and see if you enjoy my work or not.

JMW: That’s wonderful. I will be mentioning your website in the credits.

JMW: Thank you so much, Brandon. And thank you for BuzzyMag.com. 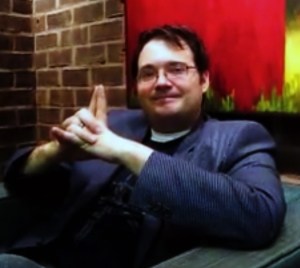